Why Is Pole Dancing Bad? Changing The Narrative

You might be asking why pole dancing is considered to be a bad thing. After all, it’s just an activity that helps you stay in shape and have fun while doing so!

In short, many people consider pole dancing to be bad because they negatively associate it with over sexualization, radical feminism, and, more commonly, stripping. Generally, this association is what springs to mind when pole dancing is mentioned and not simply the sport.

In this post, we’ll dig a bit deeper into why pole dancing is “bad” and, why some people dislike pole dancers. Hopefully sharing some enlightenment on the art and history will be useful to somebody!

Throughout modern history, pole dancing has been viewed as a highly sexualized practice. It didn’t start that way, though. Trending
Can You Do Pole Dancing if You’re Overweight?

People have been pole dancing since the early 1920s, at which time, people would entertain crowds in tents with suggestive dancing and hip movements. It was considered to be a form of entertainment, so the purpose of pole dancing as we know it remains to this day.

The first recorded pole dance took place in 1986 in Oregon, which led to the first class of performers being taught pole dancing techniques in 1994.

As you can see, pole dancing has a rich history across the United States. So, why is pole dancing bad, or assumed to be by the vast majority of people?

Pole Dancing vs. Stripping: What is the Difference?

Pole dancing is quick to get a bad reputation when it is compared to the sexualized and monetized act of stripping. While performers use the same concepts and techniques in both types of dance, they aren’t necessarily related.

One of the main reasons why pole dancing is considered to be bad is because of its similarity to exotic dancing and stripping. While they are similar, pole dancing is often done for reasons other than profiting, which makes it highly dissimilar to stripping.

The practice of pole dancing has many health benefits and supports good mental health. The confidence, muscle tone, and coordination women gain from this practice are unmatched by any other sport.

Association with a Lack of Religion

To this day, many pole dancers are confused with strippers who perform in environments that are known for the promotion of alcohol consumptions and drug use. This isn’t always the case, but the idea that strippers and exotic dancers thrive in this type of setting, is perceived by the general public.

As time went on (and as you may already know), women began profiting from dancing and stripping. Exotic dancing, stripping, and pole dancing have evolved into a lucrative business.

Again, most people associated pole dancing with stripping. So, the idea of people throwing money to a girl on stage who is dancing provocatively and removing clothing doesn’t follow the morals some people have set forth.

Although we could argue all day about the perception of pole dancing vs. stripping, the business side of exotic dancing and the stable living a lot of women make from this type of work, opponents of this type of work simply don’t want to hear it.

Much of the negative stigma of pole dancing stems from the country’s widespread negative viewpoint of nudity. While it may be acceptable to swim in a bikini, dancing on a pole for monetary gain or fitness purposes simply isn’t allowed. Even though pole dancing is different from stripping, the connotation that women will be using their sexuality and bodies for enticement is simply too much for some to look past. Pole dancing classes often do encourage women to participate in skin-tight clothes, because it improves grip. This is for health and safety reasons if you can believe that!

Those who can get past all that pole dancing and stripping are associated with begin to understand the assumed dangers of this practice. After all, climbing to the top of a pole that is nearly 8’ feet tall has some exposure for injury.

Falling from a pole is the biggest fear of many performers. Yet, when properly trained, this is a rare occurrence. More likely bruising and muscle pain may occur for newbies, but that will soon subside with experience and practice.

Pole dancing is a practice that allows women to embody their sexuality and gain empowerment. Even in this modern world, both of these concepts are viewed in a negative light.

Many opponents of pole dancing say this type of art is objectifying and demeaning to women, while it is the opposite. A lot of peoplw have a love/hate relationship with sensual dancing.

Just take a look at J.Lo’s performance in the 2020 Super Bowl Halftime Show.

It featured plenty of provocative dancing, which onlookers were enthralled by but later renounced. It just seems like the world can’t decide if it enjoys the entertainment of pole dancing or dislikes the practice from a moral standpoint.

Why is Pole Dancing Bad?

No matter how much you enjoy the performance aspect of pole dancing, it seems like many just can’t get past the stigma it has been associated with. For some reason, this practice is viewed by many as a dangerous practice that is associated with illegal acts and sexualized environments.

Don’t get me wrong. While this can be the case in some bars and nightclubs where strippers strut, that isn’t the majority of pole dancing practices. Yet, this assumption gives pole dancing a bad connotation.

Those who can get away from the stigma of pole dancing will find that it is quite fun and restorative. The benefits of pole dancing extend far beyond physical improvement.

Pole dancing gives the mind and body a chance to heal from the trauma of everyday life. Intense focus on your practice leaves little room in the mind for anything else. Healing your body and soul is one of the most touted benefits of regular pole dancing. 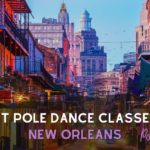